In April 2012, David Roman, assistant professor in the division of Medicinal and Natural Products Chemistry at the University of Iowa College of Pharmacy, received a grant to develop assays and conduct screens to identify inhibitors of the RGS 17 protein. This protein recently emerged as an important factor in prostate and lung cancer progression. Through early genetic manipulations, it was discovered that reducing the function and expression of the protein causes tumors to shrink and halts proliferation. Through the use of the University of Iowa’s newest core facility – the High Throughput Screening Facility (UIHTS Facility) – Roman’s group has already made initial discoveries of the first RGS 17 inhibitors using biochemical methods.

High Throughput Screening allows investigators to exponentially increase the number of experiments they can conduct to generate large data sets. The equipment uses a combination of miniaturization, robotics, and data management software to accomplish many thousands of individual experiments in rapid, parallel fashion. In a single day, high throughput robotics on the University of Iowa campus can perform up to 50,000 experiments.

The newly-founded University of Iowa High Throughput Screening (UIHTS) Facility is the first of its kind in Iowa, and will allow researchers campus-wide to conduct experiments on a scale that previously would have taken years to complete. High throughput screening facilities have been established nationwide through assistance from the National Institutes for Health (NIH) since 2004. Having such a facility on the UI campus allows students the opportunity for cutting-edge training in this industrial practice, as well as a new angle for investigators to develop tools that aid in their research projects.

According to Charles Brenner, professor and head of the department of Biochemistry in the Carver College of Medicine, “High throughput screening is an increasingly important tool in biomolecular research. We use high throughput screening to obtain lead compounds to probe the biology of protein targets that we investigate. Some of these leads have the potential to validate a target as something one wants to modulate in disease. In addition, this is increasingly how one identifies drug-like molecules for further development. Given the size of the biomolecular enterprise at the University of Iowa, it was clear that the time is right to build a screening facility – it was a pleasure working with other campus leaders to make this happen.”

The facility provides a scalable high throughput screening platform for UI investigators and beyond for clinically significant drug discovery targets as well as probes for biological functions of novel targets. This tells researchers what compounds work and why they work.

How did a HTS facility come to Iowa?

Over 20 investigators from across the University of Iowa gathered in 2009 for an interest group meeting to assess the university’s level of interest in obtaining a high throughput screening facility. From that meeting, 22 investigators from the Colleges of Pharmacy, Medicine, and Liberal Arts and Science developed a five-year plan for the immediate purchase of a small robotic system and the submission of proposals to secure funds from the National Institute of Health over the following five years to build out the instrumentation for the facility.

In 2009, these investigators, led by PI Kevin Rice, applied for an NIH S10 grant under the American Recovery and Reinvestment Act (ARRA) to develop a high throughput drug screening system. While awaiting the review of that proposal, support from the Office of the Vice President for Research and Economic Development, College of Pharmacy, Carver College of Medicine, Institute for Clinical and Translational Sciences, Holden Comprehensive Cancer Center, Brenner Lab, and Departments of Internal Medicine, Anatomy and Cell Biology, Pharmacology, Microbiology, Biochemistry and Molecular Physiology and Biophysics allowed for the purchase of a less extensive robotic system that served the more immediate needs of the investigators. This system has served as the HTS robotic platform for the past year, and has a more limited capacity and utility than the system for which the NIH proposal was written.

In August 2011, the NIH grant was funded, which allowed for the purchase of an integrated drug discovery platform at one time. This effectively allowed the five-year plan to be completed in one short year, including purchasing and installing new equipment, hiring a full time director for the facility, and support for the facility’s operations.

What equipment is available? 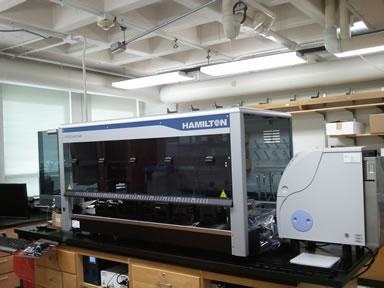 The Hamilton Star Robotic Liquid Handler System has eight independent channels and a 384-channel head. There are two on board chiller/warmers and four incubators. This equipment has the capacity to address 96, 384, and 1536-well plates.

The university currently has two chemical compound libraries available for use in high throughput screening. The Spectrum Library from MicroSource consists of 2320 structurally diverse compounds including marketed and experimental drugs as well as natural products. Chembridge, the Diverset, is a collection of 50,000 small molecules representing a wide swath of chemical space.

According to Dr. Meng Wu, director of the University of Iowa High Throughput Screening Facility, “This facility allows researchers university-wide to collaborate. On one hand, the UIHTS facility can offer the investigators the high throughput approaches to study their favorite targets for their functions, interaction, and potential pharmaceutical applications. On the other hand, the high throughput screening results will be the basis for the collaboration with multiple disciplines. Even later stage collaboration can still be performed with a high throughput approaches with the expertise from different fields. The UIHTS Facility can serve as a hub to promote collaboration within and beyond campus.”