Much has happened to move the new UI College of Pharmacy facility forward!

In the summer of 2016, workers removed the last remnants of the Quadrangle Residence Hall and began excavating the area that will house the future facility. Peterson Contractors, Inc. (PCI) from Reinbeck, Iowa, was awarded the excavation and deep foundations portion of the project. 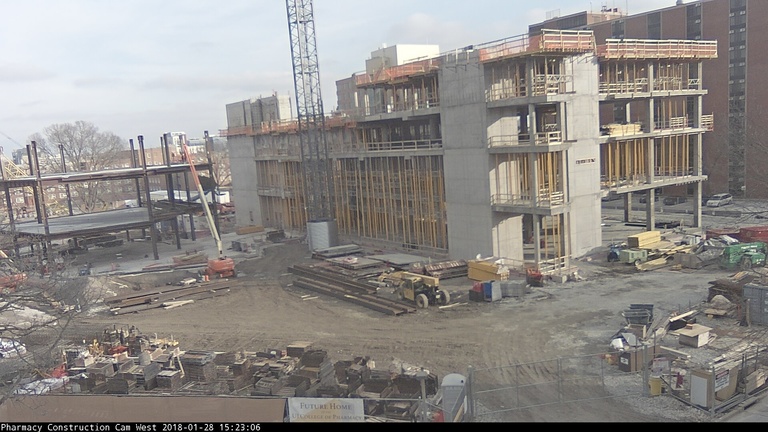 By early December 2016, Peterson had excavated a 35,000 square feet hole which was more than 24 feet deep, to accommodate the seven-story and three-story structures that will make up the new 210,000 square feet building.

By mid-March of 2017, Miron Construction, based in Neenah, Wisconsin, began constructing the new facility. Miron installed a 150-foot tower crane to move steel, concrete, and heavy equipment around the site.

In mid-July of 2017, the building started to rise out of the hole when work began on the mezzanine and first floor levels.

As of February 1, Miron workers have been on site for 338 work days, of their estimated 850 days to completion.

Currently, the fifth floor is being built. (There will be seven floors, with the seventh floor being the mechanical floor.) The seven-floor building will be equivalent in height to many 11-story buildings.

The building is still slated to be move-in ready by early 2020.