Pharmacy students love their pets and so it wasn’t surprising when an especially motivated group of them formed a chapter of the American College of Veterinary Pharmacists at the UI College of Pharmacy (ACVP).

Created in 2016, the chapter averages 12-15 members, depending on the year. Many members are fans of compounding pharmacy as well as animal lovers, said Kirsten Carstarphen, immediate past president of the local ACVP chapter. “Most of us have pets or care about the well-being of animals and want to use our compounding skills to advance veterinary medicine,” she said.

During the academic year, the student group hosts an annual compounding event during which they create placebo dog treats and suspensions that fellow students can share with their pets. The veterinary pharmacy group invites speakers to campus to share their expertise, including veterinarians who focus on animal disease research and veterinary compounding.

One of the experts the group invited this year was Pamela Mulder Nelson, of Therapy Dogs of Johnson County, who spoke about service animals and their roles in helping humans overcome mental, emotional and physical challenges. Mulder Nelson brought her therapy dog—Sofie Amanda, a standard poodle—to the event so that members could meet her. Sofie Amanda works often with children to overcome reading difficulties or to lessen anxiety in school settings.

Members of the college chapter also regularly volunteer at the Iowa City Animal Care & Adoption Center and Witty Kitties, a shelter in Solon, Iowa. In addition, they create dog toys out of old cotton t-shirts for donation to the Iowa City shelter. 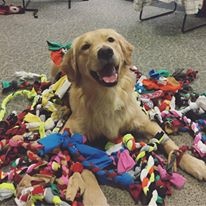 “I joined ACVP because it seemed like an interesting opportunity and I wanted to learn more about what role pharmacists can have in the care of animals,” said Kelsey Coffman, immediate past vice president of ACVP.

Veterinary pharmacists may be involved with dispensing medications that have been prescribed by a veterinarian, providing consultations on dosage and side effects, providing compounding services, and supervising pharmacy technicians or other support staff members. Compounding services are important, Coffman said, because some animals cannot easily swallow medications that were designed for human consumption.

“Since joining, I have learned more about animal health and how pharmacists can work with pet owners to ensure that pets get the maximum benefit from prescribed medications,” says Coffman. “ACVP is a group that stresses the importance of interprofessional and collaborative health care, which I also appreciate.”