When Yury Kim started college in Seoul, South Korea, she enrolled in classes to become an English teacher, eventually completing a bachelor’s degree in language instruction. But when she married an American and moved to Iowa, she decided to take a very different direction and go back to school to become a pharmacist.

She started taking science classes at Kirkwood Community College and then transferred to the University of Iowa to pursue a PharmD. Many of Kim’s family members are involved in science and medicine: her father is a biologist, her sister is studying to become a nurse, and her brother hopes to become a physical therapist. Kim will be the first pharmacist in the family. 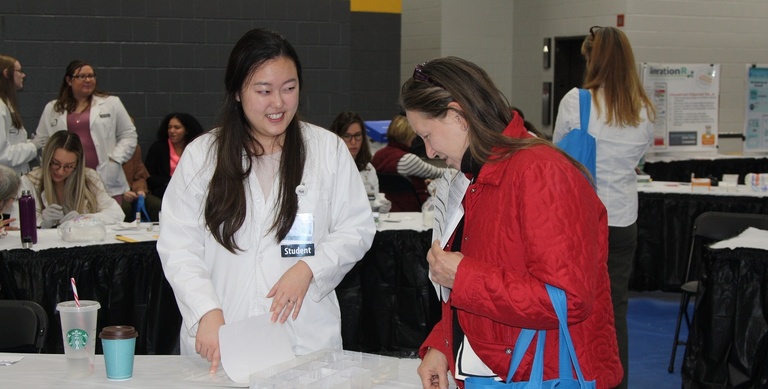 “I’ve always been interested in science, but in Korea, I was encouraged to go into teaching because of my proficiency in English,” Kim says. “I love teaching, and this hasn’t changed. I think I’ll still be able to teach as a pharmacist; I’ll just be teaching different subject matter. Helping people and watching them grow is what’s most important to me.”

Kim’s father came to the U.S. to work in academia. Kim and her siblings were born in the U.S. and have American citizenship. However, when Kim was 11 years old, her family decided to move back to South Korea. Kim thought she would stay in her parents’ native land, but then she met her husband, Max, who did an exchange semester at the University of Seoul, where she was a student. Kim then did an exchange semester at Max’s school, Minnesota State Mankato.

When the two decided to get married, they decided to make their home in the U.S. Kim says her previous experience living in America has helped with the transition, and she’s made some close friends at the College of Pharmacy. Her goal is to work in palliative care, in part because of the palliative care her husband’s grandmother received when she was dying.

Yury is a true leader when it comes to group projects, and always volunteers to go above and beyond for her team.

Kim was recently honored by her fellow students, who voted her “Student of the Month” in October. Of Kim, they said: “Yury is a true leader when it comes to group projects, and always volunteers to go above and beyond for her team.” Kim says the recognition touched her.

“Being a non-traditional student who is married and already has another degree, I wasn’t sure I’d make a lot of friends in pharmacy school, but I have been blown away by the acceptance and support of my classmates,” Kim says.

Next semester, Kim will become president of the Pain Management, Substance Use Disorder, Palliative Care (UI-PSP) organization at the College, a role she’s excited to take on. The group hosts the Death Café, a monthly meeting with coffee and hot chocolate that typically features a special guest. A recent guest was Dean Don Letendre, who supports the group’s mission to remove taboos about death and substance use.  ​

“I’m excited about what’s next,” says Kim. “I couldn’t ask for a better learning environment.”