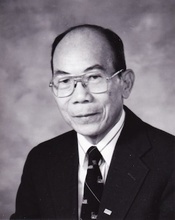 The College family is saddened by the passing of Associate Professor Emeritus Ting-Fong Chin, ’60 MS, ’62 PhD, who died Aug. 11, 2021 in Laguna Woods, California.

Chin’s children have established the Ting-Fong and Nei-Jia Chin Professorship in Pharmaceutics, an honor which will provide critical resources to the College and impact generations of leaders in the pharmaceutical sciences.

A gifted chemist and researcher, Chin’s skills in drug analysis and drug synthesis were called upon to help create and deliver many promising drugs destined for clinical trials in an effort to treat the most important diseases of the time. A faculty member from 1963 to 1997, Chin’s efforts were critical during a time Iowa became established as a national leader in Pharmaceutical Service.

As a mentor, Chin and his wife, Nei-Jia, hosted many international trainees, particularly those from China and Taiwan, helping to make them feel welcomed while pursuing an education and better life in Iowa. Chin reveled in the considerable success of his students, many of whom became highly accomplished in education, research, and industry.

We welcome others who wish to remember and participate in the Chins’ legacy by making a gift in support of the professorship at givetoiowa.org/drchin.