By the time a person is diagnosed with Parkinson’s disease, it has often already been progressing in their body for years or decades. Treatment options may be limited at that point, so early diagnosis is key. PhD student Rachel Crawford has been researching ways to address that problem and is chasing down the implications of her findings.

Crawford’s work at the College of Pharmacy is overseen by John L. & Carol E. Lach Chair in Drug Delivery Technology and Professor Jonathan Doorn. She explained what prevents an earlier diagnosis of Parkinson’s disease:

“You currently can’t diagnose Parkinson’s until after the motor problems start occurring,” she said. “There are a lot of symptoms in patients before diagnosis, but they’re very nonspecific. They’re things that we can’t say ‘Oh, this is Parkinson’s, because it’s constipation, or depression, or trouble sleeping, which can, of course, arise from anything.” 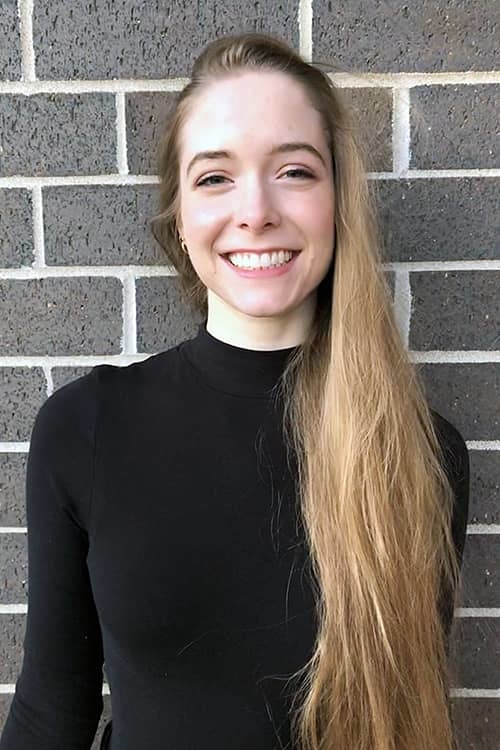 Crawford often works with cells, treating some with pesticides, and running these samples through an instrument called a mass spectrometer. “Ours has a chimney-like structure on it called a flight tube. We send the molecules flying through it and then find out how fast they reach the detector, which tells us the mass-to-charge ratio of the compound. Then I analyze the data that comes out.”

When the balance of dopamine’s usual processes is thrown off, it makes neurons vulnerable to disease, which “is likely an important beginning step in neurodegenerative disease progression,” Crawford said.

After running many experiments involving applying pesticides known to correlate to Parkinson’s risk—to cells, she made an interesting discovery. Her research identified a “biomarker” that can show early signs that something is “off” with dopamine’s functioning when it first happens. In theory, future physicians could look for this marker of Parkinson’s in patients well before the telltale outward disease signs—tremors, gait problems, and the like—are set to begin.

“This discovery could help us diagnose diseases like Parkinson’s earlier, making treatment more efficient,” Crawford said. “But there’s still a long way to go with this discovery before we figure out if it’s clinically relevant.”

Crawford received her bachelor’s degree from Black Hills State University in 2017 before joining Doorn’s lab. As an undergraduate, “I did antimalarial research for my organic chemistry professor, and that gave me a passion for further research,” she said. In her junior year as an undergraduate, she traveled to Botswana to help present that research at a national conference.

"This was a very impactful trip because we were able to interact with people directly affected by malaria. I think a lot of people in pharmaceutical research go into it because they've witnessed the pain and suffering of those they love being affected by disease and it creates a drive to help alleviate that pain," Crawford said.

Iowa was on her radar already, because her undergraduate advisor received his PhD from her current doctoral program (John Dixson, '83 PhD).

Due to her research accomplishments, Crawford has generated an impressive list of publications and awards. She was included in the university's 2021 Dare to Discover Campaign, as well as honored with a Ballard and Seashore Dissertation Fellowship, Graduate College Post Comprehensive Fellowship and a fellowship via the NIH Pharmacological Sciences Training Program (T32). These were awarded because of her research accomplishments, Doorn said. He added:

"Simply put, Ms. Crawford is an impressive young scientist in training – very bright, resourceful and motivated. She reads the literature, asks good questions, [and] exhibits a high degree of understanding. ... [She] knocks (quietly and politely) on my door frequently to show me data and talk about her project with alacrity. Rachel displays a high level of confidence and integrity when facing challenges. Such characteristics have yielded research progress of high quantity and quality."

She is expected to graduate later this year. Next, she would like to be a postdoctoral researcher or work in the pharmaceutical industry.

Regardless of where she ends up, Crawford is crystal clear about a few things that are “must-haves”.

“The first thing that lights me up is curiosity and the joy of discovery. The second thing is I enjoy working with people that are kind and understanding and excited and passionate about the work as well. And then the third thing is being in a role where the work that I do in life could potentially benefit humanity.”