Leadership in Information Technology requires certain basic skills no matter the type of employer or place in the world. This is something that the new-this-year UI College of Pharmacy IT Director Anthony “Tony” Clark knows for sure. 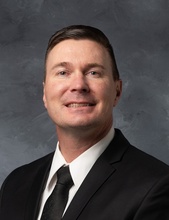 After a storied long-time military career, Clark, BA, MA, and his family moved back to his native Iowa City area to give the children some roots and be closer to their grandparents. He taught Air Force ROTC not far from the College for five years. Then he retired in his mid-40s, having served for 25 years after joining the Air Force fresh out of high school.

Just over a year after taking a break from work, his kids returned to school after virtual learning at home due to the Covid pandemic. He had made it through a full hunting and fishing season and was itching to get out of the house every day. Collegiate IT leadership position piqued his interest.

“There’s always more to learn, and I like having something to do,” Clark said.

The role has turned out not to be so different than the work he built his career on. (At least, after the initial two placements—North Carolina and Okinawa, Japan—where he maintained military base fuel systems.) In Japan, he took remote classes through the University of Maryland, and earned a bachelor's degree in Computer Studies.

He was selected to go through Air Force Officer Training School.

“My first assignment as an officer was in Wichita Falls, Texas. Right out of the gates, I had a big responsibility overseeing a 51-person network control center conducting help desk operations similar to here at the College,” Clark said.

“Having good communication skills was something I learned early on. With this type of work, you influence everyone’s area of responsibility.”

After Texas, he traveled to California, Qatar—including missions to Afghanistan—back to California, to the prior UI position, retirement, and then to the UI College of Pharmacy. His other Air Force assignments included locations in Lithuania and Maryland.

“You need to be able to communicate as an IT person, because everyone has different priorities. As a leader in this field, you have the ability to get everyone on the same page and accomplish amazing things,” Clark said.

“Here at the College, you have two separate houses,” Clark said. “You have the UI Pharmaceuticals side and the academic side. One has very, very stringent government controls, and the other has more flexibility in what you can do. The missions are different.”

Of the UI Pharmaceuticals areas, Clark said, “this is similar to what I worked with in the military. I’m used to the project management aspect where I work with the team to determine, ‘When can we slow down or stop so we can do this upgrade?’ Because it’s a government-regulated environment, the manufacturing organization needs to check all the boxes so it can stay regulated.

"This is very specialized equipment and there is a lot of coordination with vendors, almost daily.”

With academics, the IT Department ensures students have access to the resources they need to succeed, including laptops with exam and other software installed correctly. Specific environments need to be updated and maintained so there are no hiccups during instruction and testing.

The new College of Pharmacy building’s performance-based assessments rely on complex video and audio monitoring and recording software to assess students who work in small rooms providing care to patients who are actors.

Clark’s staffers have configured an even newer technology the College uses to immerse students in situations they will face in the field. It is a virtual reality system, by which pharmacy students act as future pharmacists and interact with virtual patients.

He is also responsible for staffing the department and shaping its vision. When the university’s IT strategic plan is complete, he will see how it trickles down to the College and what pieces will be unique to our plan.

Clark’s wife, Veronica, works in human resources at the University of Iowa Hospitals and Clinics. They have three children.