Floyd Domer was a “Depression baby.”

He grew up with parents who didn’t have a lot of disposable income, but he knew he wanted to one day attend college. In order to save up money for tuition, Domer worked at a local pharmacy in his hometown of Marion, Iowa.

His determination paid off.

“With the combination of that and whatever scholarships he could get at the University of Iowa, he finished his pharmacy degree debt-free,” said his wife, Judy. “He was ever grateful he was able to do that. He understood the issues surrounding people who don’t have enough money to get through college without taking out loans.” 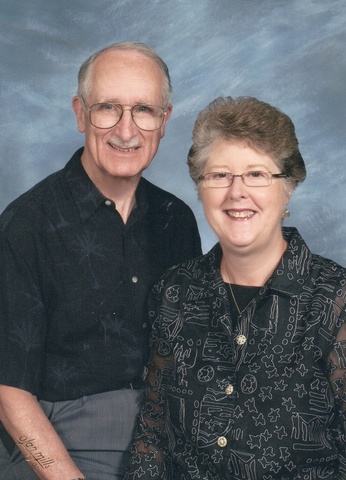 As a result, Judy and Floyd established the Floyd R. and Judith E. Domer Scholars Program shortly before Floyd passed away this past April, a week after the couple’s 57th wedding anniversary.

They also created the Domer Distinguished Visiting Lectureship in 2019 to support the College of Pharmacy’s mission by inviting leading experts to speak on specialties, including pharmacy policy, pharmaceutical discovery, leadership development, and entrepreneurship.

In fact, both Judy and Floyd were first-generation college students impacted by scholarship support. Floyd received aid through the College, where he earned a bachelor’s degree in 1954 and a master’s degree in pharmacology in 1956. He later received his doctorate in pharmacology at the Tulane University School of Medicine.

Judy herself received a scholarship to study biology and chemistry at Tusculum College in Tennessee and one at Tulane University for her doctoral studies in microbiology and immunology.

The Domers married in 1965 after they met at the Tulane University School of Medicine, where Floyd was a pharmacology faculty member and Judy was a graduate student.

The couple earned many notable and prominent roles: Floyd as a distinguished faculty member at Tulane’s School of Medicine and Judy as dean of Graduate Programs at Appalachian State University. Appalachian State is where Floyd also taught as a biology adjunct professor after retiring from Tulane. Additionally, Floyd co-authored one book, authored another, and had 76 articles published in the field of pharmacology. But his real passion was teaching. He would memorize students’ names from the composite class picture and call on them by name in class to answer specific questions.

Floyd impacted countless students throughout his career and will continue to do so even in his passing.

The day before he passed away, Floyd and Judy finalized their gift to establish the Domer Scholars Program – something they hope will benefit first-generation students like them.

“Floyd was so grateful for the education he got at Iowa that he wants to pay it back,” Judy said.