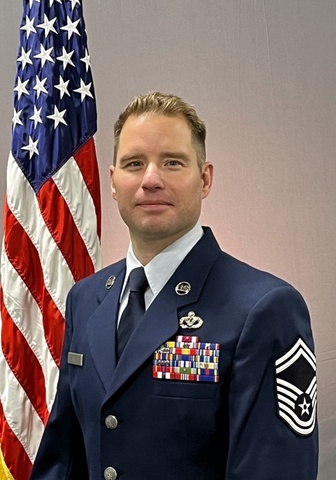 Fast planes, brotherhood, and a workplace filled with excitement. That was Jeramy Viet’s reaction as a boy in 1986 when he watched the movie Top Gun, and it ignited his desire to join the United States Air National Guard at age 17. On Saturday, Dec. 3, after 25 years of illustrious service, Viet – senior master sergeant and project manager with University of Iowa Pharmaceuticals (UIP) – will retire during a ceremony at the 155th Air Refueling Wing in Lincoln, Nebraska. The timing is fitting given the flick’s sequel also released during 2022, and Viet is ready.

“I’m looking forward to gaining more flexibility and focusing on family,” said Viet, who is raising a son and two stepdaughters with wife Julie. “At the same time, I’m reluctant because it’s been my identity for the last 25 years. I’ll miss all the good men and women I’ve worked with.”

Viet enlisted with twin Brandon, who retires at the same event one rank above his brother. “He rubs that in a little bit sometimes, but rightly so,” said Viet. “For a long time I outranked him, then the tables turned.”

It was at age 16 when the Hampton, Iowa, duo began considering service to help pay for college. “We didn’t have a lot of money and didn’t want any debt,” said Viet, who earned a UI health and sports studies bachelor’s degree in 2004. Their stepfather had been in the Army National Guard and encouraged them to take advantage of the GI Bill that trades service for scholarship, no matter which branch. A friend of their mom’s suggested the Air Guard – what Viet calls “a best-kept secret” at the time. They were sold.

Being in the Air Guard also afforded opportunities to travel, something Viet said he otherwise wouldn’t have had, and greatly enjoyed. He has been all over the United States; was deployed twice to Southwest Asia; and served in Germany, England, and Norway. As he matured, Viet’s reason for staying in the guard shifted.

“I stuck with it because of the sense of service,” he said. “It wasn’t about money anymore. It was about something greater than me.”

Viet reflected how he received encouragement from his College of Pharmacy colleagues, including care packages and cards during deployments. “I’ve had good supervisors and managers, which allowed me to serve and know I’d have a job when I returned,” he said.

Dennis Erb, UI Pharmaceuticals managing director, noted the College has gladly supported Viet. “We are proud of Jeramy’s commitment to service, which he also brings to the workplace,” said Erb. “His willingness to collaborate, focus on quality, and determinedly see a project through to completion has a positive impact on his co-workers and is recognized by our clients.”

Viet – who spent eight years with the Iowa Air Guard and 17 with Nebraska – has earned seven promotions and had 10 assignments, most recently serving as operations superintendent at the 155th Air Refueling Wing. Each one “pushed (him) outside his boundaries.” He has achieved 15 major awards and decorations, including the Air Force Meritorious Service Medal twice, the highest recognition bestowed outside a combat zone. Besides that honor, Viet said his most meaningful accolade is the Colonel William L. Deneke Outstanding Civil Engineer Unit Award his team collected in 2019 after competing against air guard plus reserve and active troops. His training, myriad of educational programs completed, and opportunities to acquire new skill sets through roles of increasing responsibility has translated well to UI Pharmaceuticals duties.

“Jeramy is a dedicated and caring person and employee, and his service has provided him with leadership skills and a very strong work ethic,” said UI Pharmaceuticals Director of Sterile Products Jill Lynch.

“He often puts in extra hours without complaint and works well with team members throughout and across all departments. He will tackle any task put before him and frequently does more than asked.”

That includes checking processes and answering questions in the manufacturing area where he “gowns up” to maintain sterility, soon to be his only uniform. No longer will Viet need to flip a switch from drill to civilian life. After a job well done, he’s getting some free time.