Jin Wants to Knock Out Cancer

Cancer patients could one day benefit from powerful new drugs inspired by an African lily and a sea sponge. Ever since those organisms were found to contain very powerful cancer-fighting agents, Zhendong Jin, associate professor in the College of Pharmacy, has led efforts to manipulate and create drugs from them.

Jin and his team members have made the anticancer compounds in the lab: OSW-1 is originally taken from the African lily; and ZJ-101 is a synthetic derivative of Superstolide A, which originally came from the sea sponge.

With enough financial support, Jin hopes in a few years to begin testing drugs based on the compounds in humans. He is making great strides toward his dream of wiping out this widespread killer.

Jin is an extraordinary teacher, and has a PhD in Synthetic Organic Chemistry.

Q: When did you come to the United States, and why did you opt to stay?

A: I was born in China. When I was 23 years old, I came to the U.S. for graduate school. I was recruited to the college in 1997. There is no doubt that science in the U.S. is best. I like this country, and have built professional contacts and a family here.

Q: Why do you focus on cancer research?

A: Cancer is a leading cause of death worldwide. In the U.S. in particular, almost every family is touched by it. We’ve learned a lot about fighting cancer in the last 50 or so years. People have a lot of hope that an effective anticancer drug will hit the market one day. It is my dream to make that happen.

Q: You and your team created two compounds in the lab that have cancer-fighting properties. How does such a process even begin?

A: Scientists in the field of pharmacognosy go to exotic locations such as the Amazon Rainforest and oceans to find plants, animals, or marine invertebrates. When these scientists find molecules with cancer-fighting potential within these natural organisms, I am very interested.

When I first came to the college, I chose to work with OSW-1. I was the first one in the United States to do so. Japanese scientists had isolated this particular compound from the bulb of a plant in southern Africa called the Ivory Coast Lily. Surprisingly, the lily had been used as a garden plant and for cut flowers for years, but it hadn’t been used in folk medicine, and nobody had studied it scientifically. When the scientists isolated OSW-1 from the bulb and tested its cell cultures, they found excellent anticancer activity. It’s 10 to 100 times more potent than many well-known anticancer drugs on the market.

The second very promising compound is ZJ-101. That molecule’s story began when Italian scientists discovered a cancer-fighting molecule, called Superstolide A, within a sea sponge that lives 500 meters deep in the South Pacific Ocean. They also determined the molecular structure so we knew what it looked like when we began to try to produce it by chemical synthesis in the lab.

I eventually designed and synthesized ZJ-101 by modifying the chemical structure of Superstolide A.

Q: Why do such cancer-fighting chemicals exist in nature in the first place?

A: Plants and animals – sponges are actually considered animals – make toxic chemicals as defense weapons to protect themselves against their predators and enemies.

Q: Is a lab-created compound that exactly matches a compound in nature as good as the natural product?

A: Yes. As long as the molecular structure is the same, they’re the same. With OSW-1, we made exactly the same molecule in the lab as the natural one. OSW-1 is a natural product and we just made the exact same thing as the plant did. 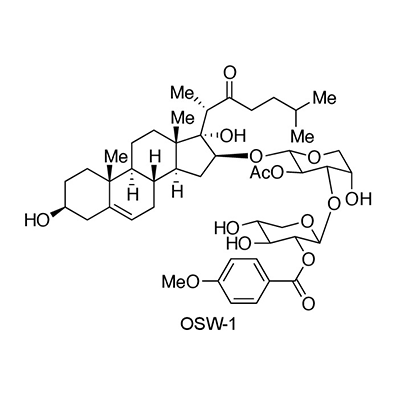 Q: Why was it important to create these compounds in the lab from scratch? Why not just use the natural products from the plant or sea sponge itself?

A: It’s a supply problem.

The isolation yield of Superstolide A is also extremely low. Each sea sponge yields 0.003% of the anticancer compound. In one kilo, you could isolate 30 milligrams. It is even more difficult with marine invertebrates because they live 500 meters deep, the next time you go there, you might not even find them. And you can’t move them to a fish tank or even up to 300 meters deep, because they can’t adapt to different environments and will die.

Then, just because an agent is very active in the cell cultures of a plant or animal doesn’t necessarily mean it will be automatically useful in humans. You need a lot of material to conduct chemical and biological studies, to try to create a drug from the compound that works well in humans. It takes a long time and a lot of material to go from cell cultures to animals to humans.

It costs more than $1 billion to develop a drug, but the more raw material you have to work with in the beginning, and the more you can think smarter with less money, the cheaper the drug will be for the end user.

We have made these molecules in the lab by applying chemical processes to commercially available organic compounds. We have solved the supply problem through our patented synthetic processes. We can make a lot more than the plants and sponges do, which provides biologists a sufficient amount of material for the biological/pharmacological studies that we expect to lead to anticancer drugs for humans.

Q: With Superstolide A, which came from the sponge, you chose not to recreate the compound with its exact molecular structure as found in nature. Why not?

A: We were about a year away from making this molecule exactly like the natural product, which would have been total synthesis. But about two years ago, I stopped trying. It has a very complicated structure and it would have taken 25 steps in the lab to create very little yield. Think about it: We pay for the elements we work with to create molecules. If each step gave you a 90 percent yield, when you did that 25 times, that’s very little end product. It’s still something, but would be exceedingly expensive, bringing us back to our original supply problem.

So I decided to cut part of the molecule’s structure. I truncated and simplified it, and named it ZJ-101. Now it has about a 6 percent yield after 14 steps. It’s quicker and more cost-effective to make, and even more potent than the natural product.

We were the first group in the world to solve this supply problem, and we did it indirectly.

Q: What has been happening with these two compounds since you synthesized them in the lab, and what’s on the horizon?

A: More than 10 years ago, my first PhD student and I made the OSW-1 molecule. We made the truncated Superstolide A molecule in 2012.

Since then, we have been collaborating with biologists and pharmacologists to evaluate the molecules’ therapeutic potential through biological testing in cell cultures and on animals.

We are trying to figure out exactly how these molecules kill cancer cells so efficiently. It’s very difficult: Nobody knows. It’s important to find out because when you know how something works you can make it even better. These excellent compounds attack cancer cells much more efficiently than what is currently on the market, that we expect to develop entirely new categories of drugs.

With more financial support, we can produce enough experimental drug material to see if tumors might be stopped completely. We’re working to optimize them, improve their effectiveness and reduce overall toxicity levels. I firmly believe these compounds have a big future. I expect both will be able to make it to the clinical trial stage of human drug testing within a few years.

Once there, the drugs will have to prove they are safe, good quality, and effective before we can seek governmental approval to market them.

Q: So now that we understand your work in depth, what makes it stand out in the field?

A: There is no doubt that our team is the world leader in the medicinal chemistry and biological studies of superstolides and OSW-1.

The fact that we are advancing two novel anticancer agents into a pre-clinical trial stage with limited funding and a small research group in the academic setting truly reflects our outstanding research productivity as well as our courage, creativity, hard work, determination, and passion for cancer research.