Student success comes from hard work, a strong supportive network, and sometimes the philanthropic backing of those who have come before you. Over the last ten years, David and James Carlson have supported two students each year as they pursued their Doctor of Pharmacy Degrees. 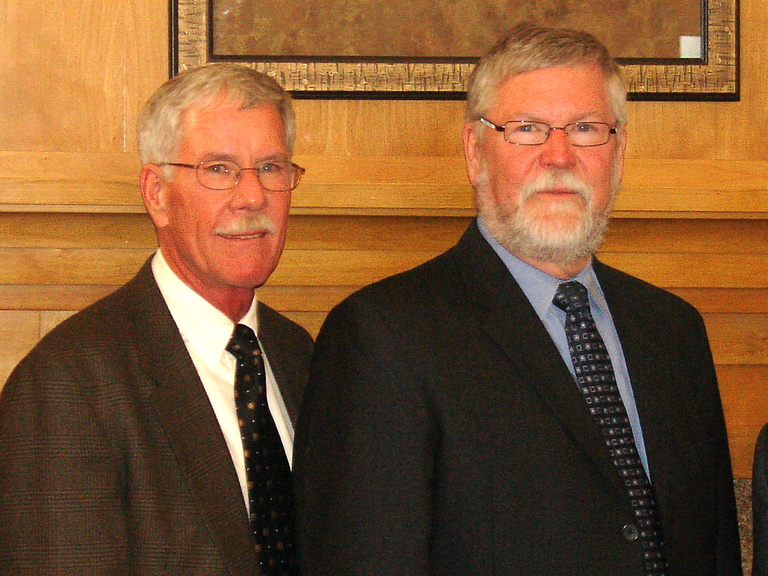 Dedication to the University of Iowa College of Pharmacy runs in the family for the Carlsons – two former Iowa farm boys who have devoted their lives to the field of pharmacy practice and education. Raised on a farm near the northwest Iowa town of Linn Grove, the brothers shared a passion and aptitude for the science that led them to pursue similar academic careers.

David attended Buena Vista University in Storm Lake, Iowa, for two years and then transferred to the University of Iowa College of Pharmacy where he completed a Bachelor of Science in Pharmacy in 1966. After his graduation, David entered the combined hospital pharmacy residency/master’s program and he began work as a unit dose manager at the University of Iowa Hospitals and Clinics in 1967. He graduated with a master’s degree in 1970.

In 1971, David moved to Tucson, Arizona, where he worked at University Hospital at the Arizona Medical Center until returning to University of Iowa Hospital and Clinics in 1973. A year later, he began work as the assistant director of pharmacy at Iowa City’s Mercy Hospital, where he had worked part time during undergraduate and graduate school. In 1987, he was promoted to director of pharmacy at Mercy Hospital. In 2009, David retired from Mercy.

James completed a Bachelor Science in Pharmacy from the UI in 1971. After graduation, he completed a tour of duty with the U.S. Indian Health Service Pharmacy Services in New Mexico and Oklahoma from 1971 to 1974. He was also a pharmacy instructor for Southwestern State University from 1972-1974. He went on to earn a Doctor of Pharmacy in 1976 from the University of Michigan and completed a clinical pharmacy residency at Buffalo General Hospital in 1976. He then accepted a teaching position at North Dakota State University College of Pharmacy where he was on faculty for a decade.

James is currently the CEO of Algorithme Pharma USA, an internationally-recognized contract research organization that conducts over 200 clinical trials annually in phase i/iia, bioequivalence, bioavailability, 505(b)2 research and bioanalysis. Prior to assuming the position at Algorithme, James was the co-founder of PRACS Institute, Ltd., of Fargo, North Dakota, and East Grand Forks, Minnesota, which was established in 1983 as a clinical healthcare research facility evaluating pharmaceutical products. James and David have served on numerous pharmacy boards and associations. David was an adjunct clinical faculty member for the UI College of Pharmacy.