Steve Baird, ’86 BSPh, ’90 JD, has 25 years of experience as a lawyer protecting the trademarks associated with brands.

Baird received a Bachelor of Science in Pharmacy before going to law school. He is currently a practicing lawyer and chair of the intellectual property department at Winthrop & Weinstine, P.A. in Minneapolis. He represents brand owners across a variety of industries, including many pharmaceutical, dietary supplement, and medical device companies. 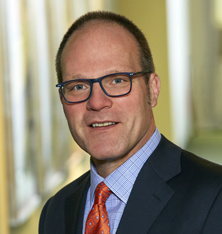 Baird has faced many forks in the road of his professional education and career.

He was initially a chemical engineering student in Michigan. Although he had a strong interest and proficiency in chemistry, though, “my coursework wasn’t as much fun as I thought it might be,” Baird said.

In 1982, Baird started studying at the UI College of Pharmacy and working in the medical chemistry lab of Joseph Cannon and the pharmaceutics lab of Douglas Flanagan. The summer before graduation, he headed to Virginia for an internship where he met other pharmacists that had taken different career paths and gone to law school to become FDA lawyers, products liability lawyers, and patent lawyers. "This opened my eyes to a fairly unique career path building upon a strong pharmacy foundation,” Baird said.

“I applied only to the University of Iowa law school, thinking if I got in, it was meant to be,” he said. Fate smiled upon him.

After graduating from law school, Baird completed a year-long judicial clerkship in Washington, D.C.—under a federal judge who heard appeals from U.S. Patent and Trademark Office decisions. Throughout law school and during the clerkship, Baird worked as a part-time community pharmacist. After D.C., Baird began his legal career in Minnesota.

“I owe much of what I have accomplished over the course of my career to the early lessons learned at the College of Pharmacy,” Baird said. “I learned to be diligent about staying on top of new information and material, and about the importance of mastering new and rapidly-changing technology and discoveries. These skills have helped me greatly as I work to protect innovations.”

A creative thinker and legal strategist, Baird has been a Super Lawyer® every year since 2004, as well as a top 100 Super Lawyer® in Minnesota, and he has been twice named an Attorney of the Year by Minnesota Lawyer. He has been named among the Best Lawyers in America® since 2012. Since 2013, Baird has been named an IPStar, and also recognized in World Trademark Review 1000 for his distinction in the field of trademark law.