Susan and Patrick Keefe are set to receive a special University of Iowa College of Pharmacy Humanitarian Award during the 2018 Alumni Awards Ceremony on Thursday, October 18. The award will honor the pharmacist-nurse couple, who have dedicated their lives to helping people in need. The Keefes are long-time generous donors to causes they believe in—including the college—often through the Keefe Family Foundation. 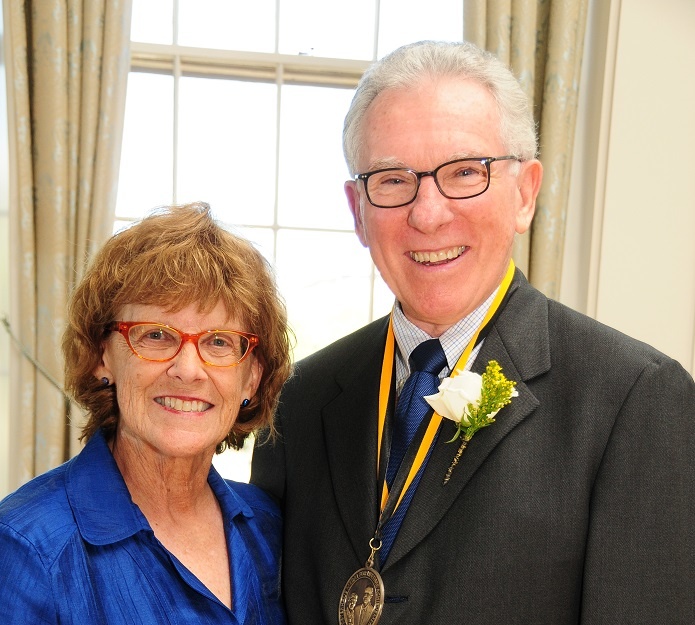 Patrick, ’69 BSPh, MBA, and Susan Keefe, BS, grew up in Fort Dodge, Iowa, and a farm outside of Rock Island, Illinois, respectively. After marrying and completing their formal medical education, they volunteered in 1971 with the Diocese of Davenport, Iowa, to be medical workers in Mexico. They were stationed in the southeast Mexican mountain village of Tila, Chiapas, which didn’t have electricity or passable roads. There, they were in charge of a clinic for the Ch’ol Mayan Indians. They provided health care, immunizations, and taught healthcare workers.

"At the time, we were the only medical workers in our town, which had a population of 3000," Sue Keefe said. "The Ch’ols would sometimes walk two to three hours to reach the clinic. Our first child, Michael, was born during our time there. When I was in clinic, Michael was on my back or with Pat. When Pat traveled with Padre Fidel, we were in the clinic together."

"We saw how real poverty, lack of education and access to medical care can impact a community,” Pat Keefe said. “That has led to our commitment to social justice and education."

The couple moved back to the United States and has lived in Cincinnati, Ohio, since 1993. From there, the couple has continued to reach out to vulnerable communities. For example, Sue Keefe has offered time, talent, and treasure to improve conditions for immigrants, women and children during and after pregnancy, and people struggling with hunger. She is serving a third term on the board of the city’s Healthy Moms & Babes organization, and has volunteered with them. The couple has also helped resettle two refugee families, one from Sudan and another from Syria.

The Keefes are longtime financial supporters and volunteers for a Nicaragua-based cultural center and the nonprofit organization—Friends of Batahola—that raises money for the center. It promotes women’s autonomy and aims to enrich the education and psychosocial resilience of children and youth. Sue Keefe has been on the organization’s board since 2002. She has led 15 youth trips to visit the country and her church welcomes visitors from the cultural center yearly.

The Keefes are also longtime supporters of Hope for Kabingo, which runs yearly missions to improve health, education, infrastructure, and economic conditions in Uganda. Pat Keefe—on the board since 2014—travels to volunteer in Uganda every other year (when he is not joining his wife in Nicaragua). Three PharmD students from the college have accompanied Keefe to Uganda.

In 2014, they established a service-learning scholarship for UI pharmacy students who volunteer to work with underserved populations. Earlier, the Keefes established a pharmacy professorship which has gone to Barry Carter, ’78 BSPh, PharmD, professor of pharmacy practice and science, since 2011. Pat Keefe has served on the College of Pharmacy Dean’s Club board several times, and received the college’s pinnacle award in 2016.

The Keefes have both retired from long-term careers—Pat Keefe from being the chief operating officer of Omnicare, Inc., and Sue Keefe from nursing. Pat Keefe is now principal of a consulting company, Bridge Healthcare Partners.

"Volunteering to improve lives has always been important to us," said Sue Keefe. "As a family we have always been active in soup kitchen work and Thanksgiving and Christmas collections. We encouraged all three of our children to volunteer after college. All of us have become so enriched with those we have met along the way. We have all become family."