In Tune with Medicinal Chemistry

Arturo Aguirre will soon earn a PhD in Pharmacy from the UI College of Pharmacy. He plans to use his advanced expertise in a specific type of chemistry to improve lives through creative, team-based science.

Aguirre was born in Texas to a family with Mexican roots, which highly valued community and family relationships. He was raised in Joliet, Illinois. There, his high school classes were large and he would count the minutes until band practice. For him, playing music on his clarinet was everything. Academically, he was interested in math and science generally. Ironically, when he took introductory chemistry courses in high school and as an undergraduate, he didn’t love it.

He joined Michigan State University as a Biomedical Laboratory Science major on a pre-dental track, because he was interested in the medical field. When Aguirre took organic chemistry there, he was lit up; his scientific path started to emerge.

“It was more in tune with my way of thinking,” he said. He started conducting research. “It was exciting, because I was essentially playing with matter to build molecules. 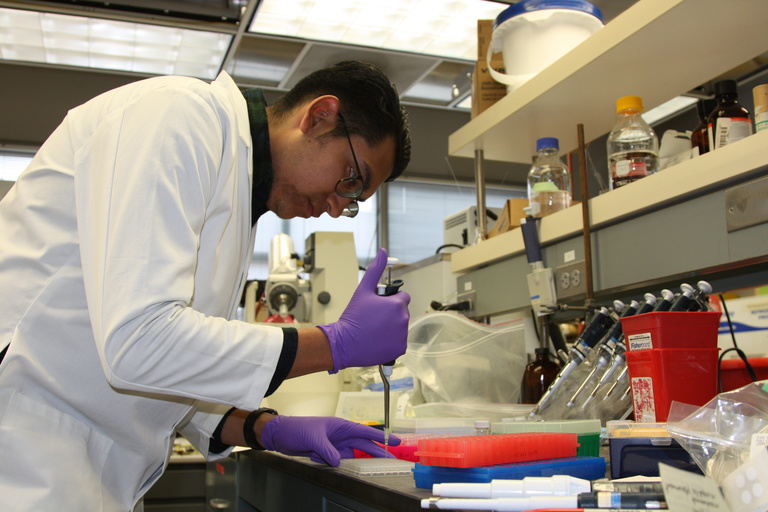 “Chemistry was to me almost a full-on extension of music,” he said. “In band, we were never really playing Bach or Mozart; you’re always interpreting that piece and thinking of seven things at once. In lab, we interpret the molecule. And each time you make a molecule, it is novel, even if it is the same molecule, because the light, temperature, and other factors are never exactly the same. To me that’s really exciting.”

Aguirre still needed to fine-tune where in organic chemistry he fit exactly. At Michigan State, he talked to his professors about how he could apply his love of chemistry to the medical field. They guided him to the field of medicinal chemistry. Aguirre found his way to the UI, and the Medicinal and Natural Products Chemistry (MNPC) program in the laboratory of Robert Kerns—professor and chair of the Department of Pharmaceutical Sciences and Experimental Therapeutics (PSET). Students help Kerns develop new drug therapies for multiple disease states.

A year into Aguirre’s time at the UI, he was selected to receive a T32 grant training position in biotechnology under Kerns, who is also that program’s director. Aguirre used some of the funds to work as an intern in two companies in the pharmaceutical industry: Integrated DNA Technologies in Coralville, and Genentech in South San Francisco.

At Genentech, Aguirre found his tribe. Like him, the rest of his team there valued teamwork, and had a passion for developing medicines that will improve the quality of lives.

“I found what I loved to do,” he said. Along the way, Aguirre brought fresh insights back from the industrial world to enhance his thesis.

After graduation, he plans to apply to positions in major pharmaceutical companies in Chicago, Indianapolis, San Diego, and the Bay Area.

“My ultimate goal is to collaborate with other types of scientists to improve people’s quality of life,” Aguirre said. “It took many people to make acetaminophen (also known as Tylenol) and other therapies. When a physician prescribes a pill, countless hours went into making that drug.”