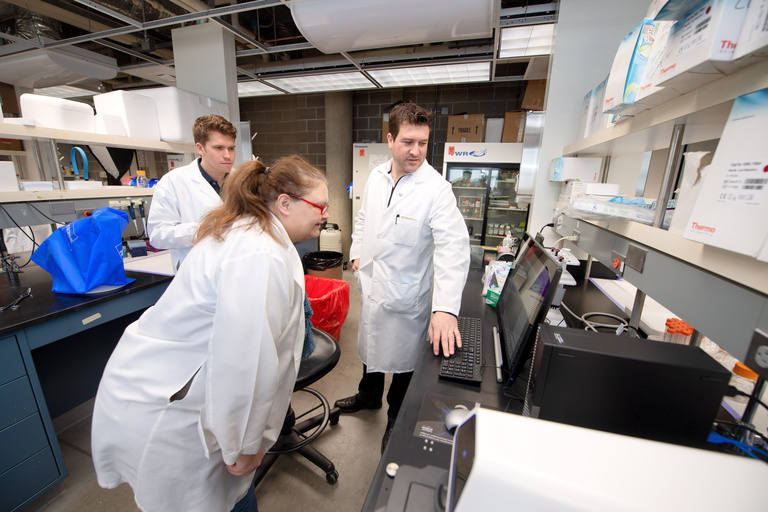 Ethan Anderson, PhD, researches cardiac complications of diabetes and sepsis; his research is geared towards the development of novel therapeutics and biomarkers of heart disease risk.

A lot of this research involves mitochondria, the “energy factory” of all cells, responsible for consumption of our food calories. However, work over the past couple decades has determined that mitochondria are also responsible for control of just about everything in the cell, including growth, proliferation, and cell death. This makes the mitochondria an ideal drug target for many disorders and diseases.

Anderson’s lab, which relocated to the UI College of Pharmacy at the end of 2016, studies how mitochondria act differently in the heart and other major organs with diabetes and sepsis. By understanding how mitochondria change and communicate with other cells, he hopes to identify ways to reduce heart failure and other cardiac complications associated with these disorders. Using this information, he expects to be able to develop treatments that can use the mitochondria as a target for drug therapies. His research could also lead to using existing treatments like chemotherapy to specifically target mitochondria to kill the bad cells and, at the same time, promote the health of good cells.

His approach, which ranges from work in test tubes up through animal models and donated human tissues, increases the chances of developing new medicines and treatment methods. He is excited to be at the University of Iowa “surrounded by outstanding medicinal chemists and molecular pharmacologists” to progress his research. Productive collaborations between Anderson and other College of Pharmacy faculty have already begun; he and Jonathan Doorn, associate professor also in the Department of Pharmaceutical Sciences and Experimental Therapeutics, were recently awarded an exploratory grant from the National Institutes of Health to examine how toxic byproducts of neurotransmitters might contribute to heart disease.

Anderson is also a part of the Fraternal Order of Eagles Diabetes Research Center, a multidisciplinary group of more than 90 researchers from across departments, that has its home base at the UI Carver College of Medicine.